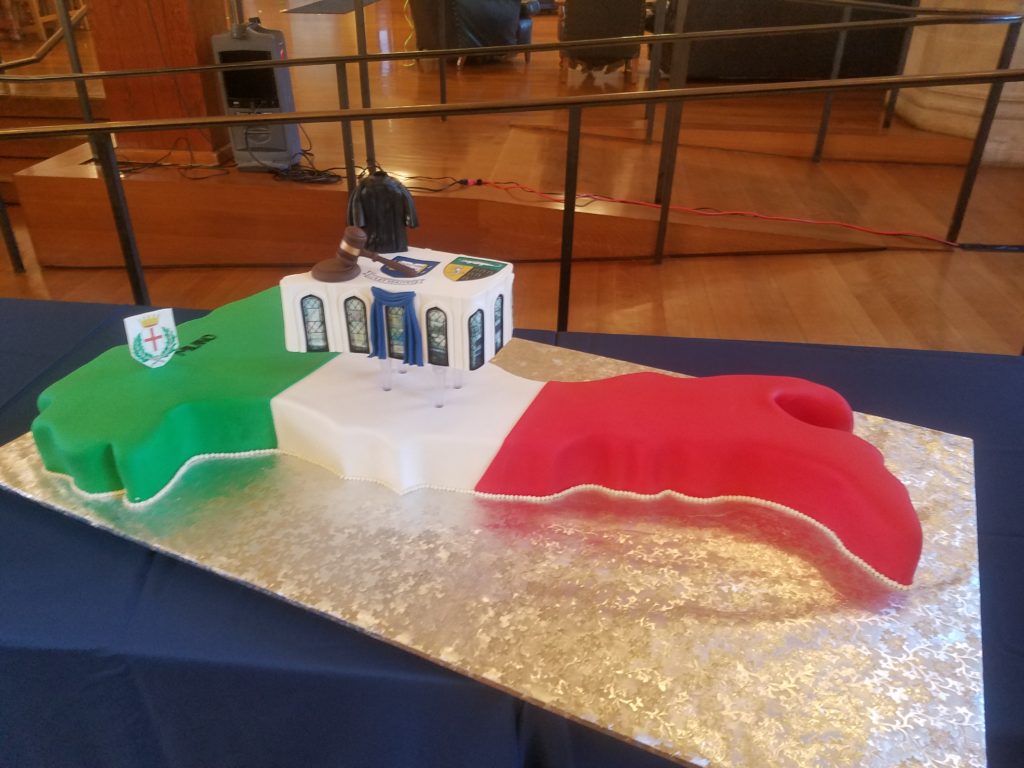 We were unbelievably honored to create this cake for Federal Judge Guido Calabresi’s 85th birthday! When Yale Law School reached out to us to help make his celebration special with custom cake, we jumped at the opportunity. This cake has so many details that are important to Judge Guido, so it was a priority of ours to make our biggest cake thus far a success!

Judge Guido has a deep Italian heritage, and was born and raised in Milan until coming to the United States and becoming a citizen, so incorporating Italy in this cake was a must. This was chocolate and vanilla cake with vanilla French buttercream filling that was cut into the shape of Italy. The cake was covered in green, white, and red fondant to show the Italian flag. To add something special, Milan was marked off in the exact location it would be on the map.

The top tier of this cake was packed with tons of detail, and each one was equally as important. Having lived in the Connecticut for the majority of his life, it was an easy choice to have a cut out of the state as the top tier of this cake. The sides of this cake featured stained glass windows that can be found at Yale Law School. Judge Guido graduated with his bachelors and law degree from Yale University, became a professor after his Supreme Court clerkship, and finally became the Dean of Yale Law in 1985. To add to his achievements, President Bill Clinton nominated Guido as a US Circuit Judge of the United States Court of Appeals for the Second Circuit. With that being said, it was only right to showcase all of these on the cake! Also on the top tier is the Yale University crest, the Yale Law School crest, a gavel, and his robe.

Thank you again to Yale Law School for letting us make this amazing design come to life. A man as important as Judge Guido deserves an incredible cake like this!

Welcome to JCakes!  Please be aware appointments are required for all cake and cupcake consultations. We kindly ask for at least 10 days notice for all orders.  Please place orders of any size as early as possible.